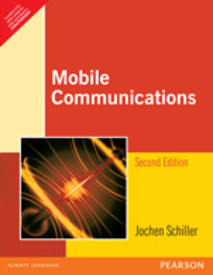 Mobile Communications introduces the topic by providing a thorough grounding in the field of mobile communications. A wide range of examples is combined with a strong pedagogy to allow the book's use in high level courses and for self-study. This book provides a non-mathematical, computer science focus.

Jochen H. Schiller
received his Master¿s and PhD degrees in computer science from the University of Karlsruhe, Germany, in 1993 and 1996, respectively. In 1996 -1997 he was a DFG postdoctoral research fellow at the Department of Computer Systems, Uppsala University, Sweden. Between June 1997 and April 2001 he was researcher at the Institute of Telematics, University of Karlsruhe. In September 1999, he was appointed Associate Professor attached to the École de Technologie Supérieure (ÉTS), Université du Québec, Canada. Between April 2000 and July 2000 he was Chair of Distributed Systems, Christian-Albrechts-University, Kiel, Germany, In February 2001 he received his habilitation on the topic "Quality of Service Aspects in Mobile Communication Systems". Since April 2001 he is Full Professor, Chair of Computer Systems & Telematics, Institute of Computer Science, Freie Universit¿t Berlin, Germany. He co-authored many articles and several book chapters on mobile and wireless networks, quality of service aspects and security issues.

I am working as a python developer in Pune.
I am also providing ERPNext Implementation service.

If you need any help related to ERP implementation or application development, you can contact me on my email id kolate.sambhaji@gmail.com